After one or two more test runs, I finally came to a design I was very happy with. 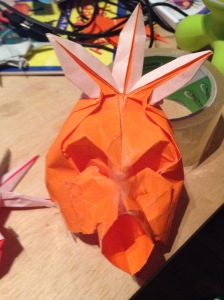 The biggest change between my original idea and the final result is the way I made the eyes.  Originally I had planned to use the back side of the paper, as in the original ‘sketch’.  The final, on the other hand, uses three-dimensional depressions to form eye sockets – an effect I’m very happy with for two reasons.  For one, I think it makes it look much more mask-like.  And secondly, in the source material, while the eyes are a distinctly different color from the rest of the face, they are even more different from the leaves on top.  If I had made them with the back of the paper the eyes would turn out green, just like the leaves.  It wouldn’t have been terrible but I think this solution will be a better match to the original color scheme.

Once I had finished, though, I soon ran into my next issue:  Reproducing the results.  Like with the Scientific Method, it doesn’t count if you can’t do it again.

Somewhat ironically, it took me almost as long to repeat the process as it did to come up with it in the first place.  The second time through I took pictures every few steps, which I chose not to do the first time because I had no way of knowing whether or not the process would be worth preserving until I had found an end result I was happy with.  It took me three tries to do it again, but I got it, and I should be able to recreate the Deku Mask reliably from now on.

As you can see, I didn’t fine-tune the second one nearly as much.  The first time I wanted to be really sure it would end up looking right.  The second time I just had to recreate the basic structure, not get as bogged down on the details.  That’s why the eyes are slimmer and the leaves on top are much more basic.  But in terms of mechanics, it’s effectively the same piece.

Now all I have to do is make the proper paper for it.  I want to make the papers really match the subjects, so for the Deku Mask I want to find a brown with some actual bark chips and a very fibrous green.  Prepping the paper will be covered in the next update.